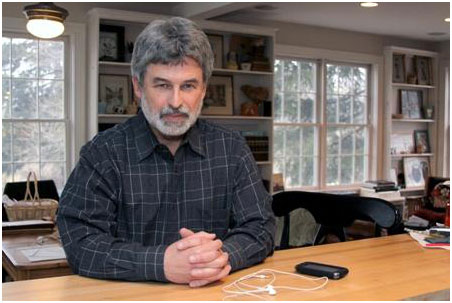 Work was, and still is, fun

Andy Thibault began writing for pay at age 17 in 1970 for the sports departments of The Groton News and The Norwich Bulletin. His first story was Pee Wee Football Roundup. Other assignments included coverage of Little League baseball and high school and college basketball and baseball, as well as track, football, tennis, wrestling and swimming. Highlights included shaking the hand of former New York Yankee great Yogi Berra, then manager of The New York Mets, and learning a strong work ethic from sports editors Brian Willett and Tim Tolokan and our colleagues.

In sports, work is fun, and that spirit thrives in newsrooms as well. This remains true to a certain degree even in today’s world of the rapidly shrinking and disappearing newsroom.

Thibault reported extensively on police brutality in Hartford, the Young & Rubicam “Come Back to Jamaica” kickback scandal, the Russian Mob in Brooklyn, NY, the Independent Counsel investigation of the late U.S. Commerce Secretary Ron Brown, the cover-up of a hit-and-run death in New London, Connecticut and the 1996 bombing at Centennial Olympic Park in Atlanta.

He went on from sports writing to work as a reporter and editor for newspapers including The Bulletin, Shore Line Newspapers, The Wilkes-Barre, Pa. Times Leader, The Stamford Advocate & Greenwich Time, The Hartford Courant, The Torrington Register Citizen, The Washington Times, The Connecticut Post and The Connecticut Commercial Record. He was a columnist for The Connecticut Law Tribune from 2000 – 2006 before taking off some time and scaling back professional activities as a result of a successful battle against colon cancer.

His profiles of subjects including poets, prosecutors and defense attorneys, as well as essays on the arts, have appeared in magazines including Connecticut Magazine and Northeast Magazine. His work also has appeared on Page Six of the New York Post.

His mentors include John Peterson at The Norwich Bulletin and Shore Line Newspapers, Bruce DeSilva at The Hartford Courant and Vince Valvo at The Connecticut Law Tribune.

Thibault has also worked as a private investigator for law firms in Connecticut, New York, California and Washington, D.C., and as a professional boxing judge. His public service includes commissioner and hearing officer for the Connecticut Freedom of Information Commission, board member for the Litchfield Board of Education, the Oliver Wolcott Library and the former Connecticut Commission on the Arts and chairman of the Connecticut Boxing Promotion Commission.

Thibault is chairman emeritus of the Connecticut Young Writers Trust, a foundation that has affirmed the work of more than 8,000 teen-age poets and writers and awarded more than $215,000 in prize money. He served as a mentor in the MFA writing program at Western Connecticut State University and as an adjunct professor for the English and Writing departments. He also taught writing, journalism and public speaking at the University of Hartford and blogging at Northwestern Connecticut Community College. Thibault majored in political science at Boston University.

His first collection of columns and stories, “Law and Justice in Everyday Life,” was published in 2002. His other books include “The History of the Connecticut State Police” and “The 12-Minute MBA for Lawyers,” with Charles Johnson.

Thibault was honored by the Connecticut Council on Freedom of Information in 2014 with the Stephen Collins Award for his “many contributions to the cause of open and accountable government and a free and vigorous press.”

Thibault and his wife, Lora, an insurance company executive, are the parents of four children.

Cover photo courtesy of Chloe Poisson and The Hartford Courant